Our craftsman, Yaemon Aoki, fifth generation, presents his job
In Taketoyo, a town famous for its fermented products, we produce 'Mame Miso', with a natural taste, made from pure soybeans and 'Tamari', a pure and concentrated soy sauce, in the traditional way.

Traditional miso and soy sauces are long-lasting, preservative-free and chemical-free products thanks to their beneficial natural enzymes and yeasts.
We try to produce the only, the best and use natural sea salt called "Umi no Sei" which is rich in minerals and contains less sodium, which results in a smoother taste. We use soy grown in Japan from sustainable agriculture. Fermented Miso and Tamari are stable in a huge wooden vat, but they lose that stability when exposed to air; therefore, great care is taken during the packaging process.
Our mission is to preserve and protect the traditional method of making organic miso and tamari, because it is more natural and healthier”.

Mame miso - Soy beans miso
The most important part of the Miso making process is to make the "Koji". First, the soybeans are mixed with the "Koji" mushroom and kept at 30°C , with good air circulation, to incubate for three days. In “Minamigura”, “miso Shikomi” (fermenting soybeans) is still only made once a year, from late February to April. The amount of salt water is decided by analyzing the state of the "Koji" thus precisely controlling the salinity.
"Shikomi" is the process of putting the "Koji" and a salt solution in a huge vat of Japanese cedar wood, nearly 150 years old and taller than a man. The mixture is then pressed and the whole process is repeated several times. Then it is kept for three years to ferment and age. Large industrial companies use Warmed Brewing which keeps the "Koji" at 30°C all year round to artificially accelerate fermentation.
This process costs less and is more profitable but does not have the strong subtle taste due to lack of aging.
"Mame Miso" made by natural brewing achieves its characteristic and strong taste, by its long exposure to hot and humid Japanese summers and to cold and dry winters.
"Mame Miso" is never heated during the entire manufacturing process; therefore, its flavor and enzymes remain alive. 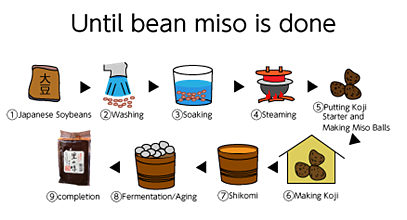 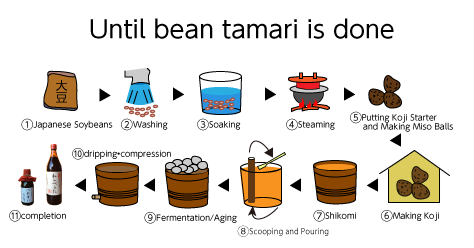