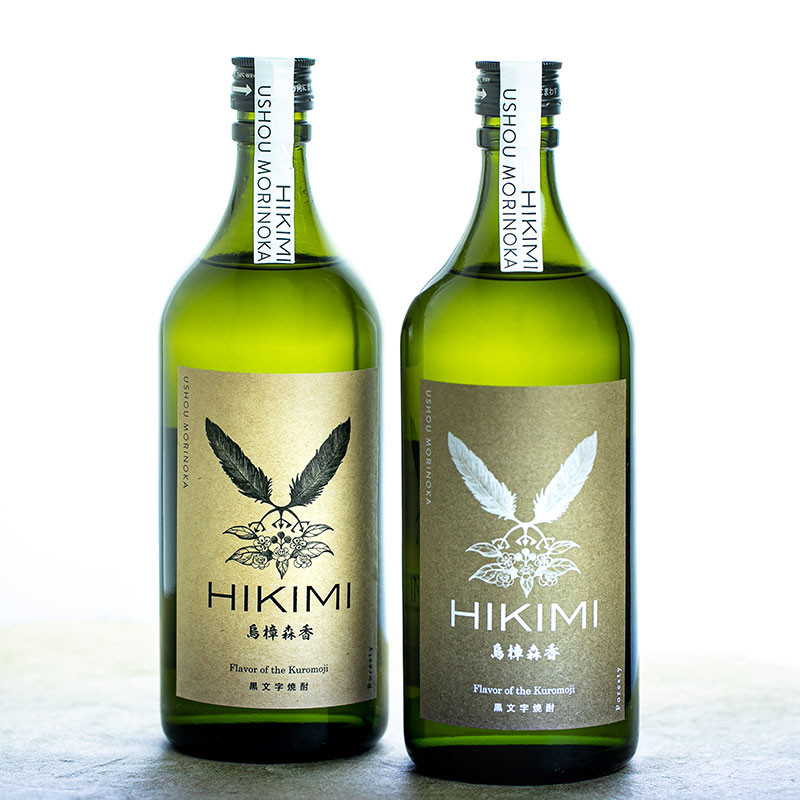 Ushou Morinoka shochu is made by mixing finely chopped kuromoji into wheat shochu wort and distilling it under reduced pressure to preserve the aroma.

It was created to be drunk like sake, in a small cup, so that its magnificent aroma does not interfere with the food, but complements it with a clean and refreshing taste.
It has been well received in Japan by women who dislike the rustic aroma of potato shochu.
It differs from gin which is made from several plants. It has a sweet aroma and herbaceous flavors.
Its refreshing taste goes perfectly with fatty or richly flavored dishes.
You can enjoy it over ice or in a cocktail, or with a tonic.
Feathers on the bottle label represent the Yatagarasu, sun embodiment, and its three legs represent the sky (god), the earth (natural environment) and the human (human).
The flowers and leaves under the wings represent the kuromoji.

Kuromoji (Lindera umbellate) is a deciduous broadleaf shrub that grows naturally in the forests of Japan.
Since Antiquity, its branches have been used for making picks for tasting pastries during tea ceremonies.
It is also known by its vernacular name: Ushou.
Japanese medicine has demonstrated its beneficial effect on gastrointestinal transit. Its leaves and bark have a refreshing scent, which has led to its recent use in cooking, in various forms, in Michelin-starred French and Japanese restaurants.
This fresh scent is due to linalool, the same substance found in rosewood, which was once used to make perfume, and is also found in abundance in camellia.
Linalool has been shown to have relaxing properties, making it a popular product for making essential oil.
Hikimi, name of a region where horseradish has been cultivated since ancient times, is renowned for its natural forests where kuromoji, raw material for kuromoji shochu, abounds in the wild.
Name Ushou morinoka, "forest sake", comes from the herbal medicine name of kuromoji, "Ushou", and the refreshing scent of the forest.