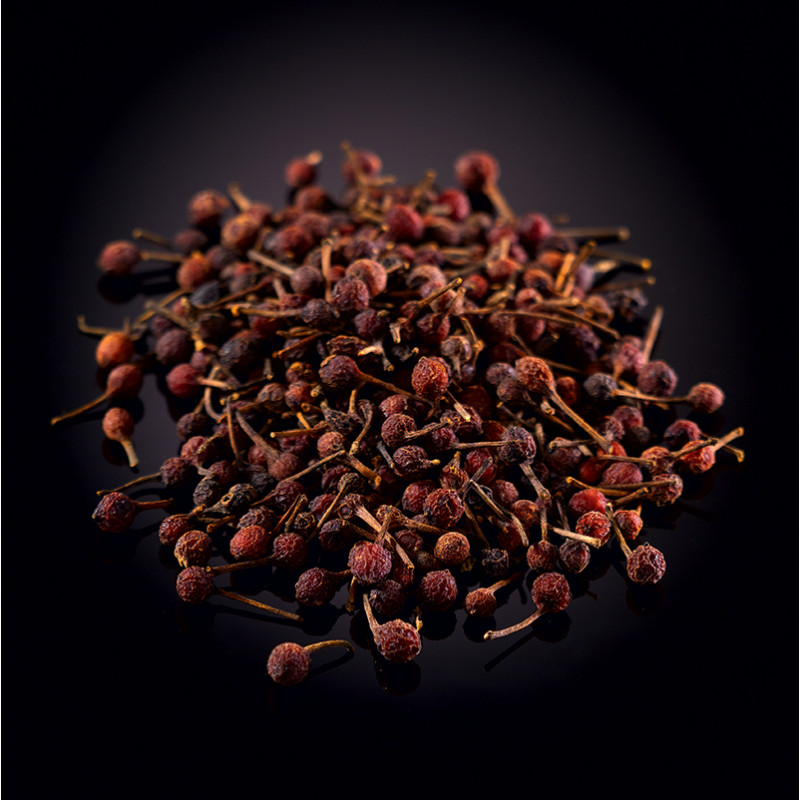 It is the same pepper as the black Voatsiperifery pepper but picked at full maturity, which gives it much hotter notes.

The Voatsiperifery is the fruit of a vine belonging to the Piperaceae botanical family.
It grows on tall trees in the tropical forest, in the hot and humid regions in the south-east of the island of Madagascar where it is harvested by village communities.
It can also be found on Réunion and Mauritius.
It is often confused with the cubeb pepper. It is even called "country cubeb" in Mauritius. It is given other common names: brown betel nut, wild or betalle pepper.
It is a small peppercorn with a small caudal appendage.
It comes in three colours, corresponding to the different stages of ripening: black, white and red.
It is a rare product because the harvest is always difficult and the vines are sometimes inaccessible, growing up to twenty metres high.
Its preparation is very delicate, because it has a high water content and the corns are very fragile.
Ten kilos of fresh corns are necessary to obtain a kilo of dry spice.
The fruit turns red at maturity and blacken when dried like their cousin "piper nigrum". This spice from the pepper family is very little known and even in Madagascar it is seldom used.
It is found used fresh in a few traditional dishes and especially ground with different varieties of pepper. This wild pepper is less powerful than black or white pepper.
Crush it at the time of use.
A coarse grind enables the aromas to be fully developed.
Avoid aggressive cooking which makes it bitter and spicy and makes the more subtle flavors disappear.
Preferably crush it directly onto your dish when it is served.
Despite its exuberant aromatic character, these peppercorns are very easy to use.

It is used in the same way as the wild black pepper, but with a much hotter finish.