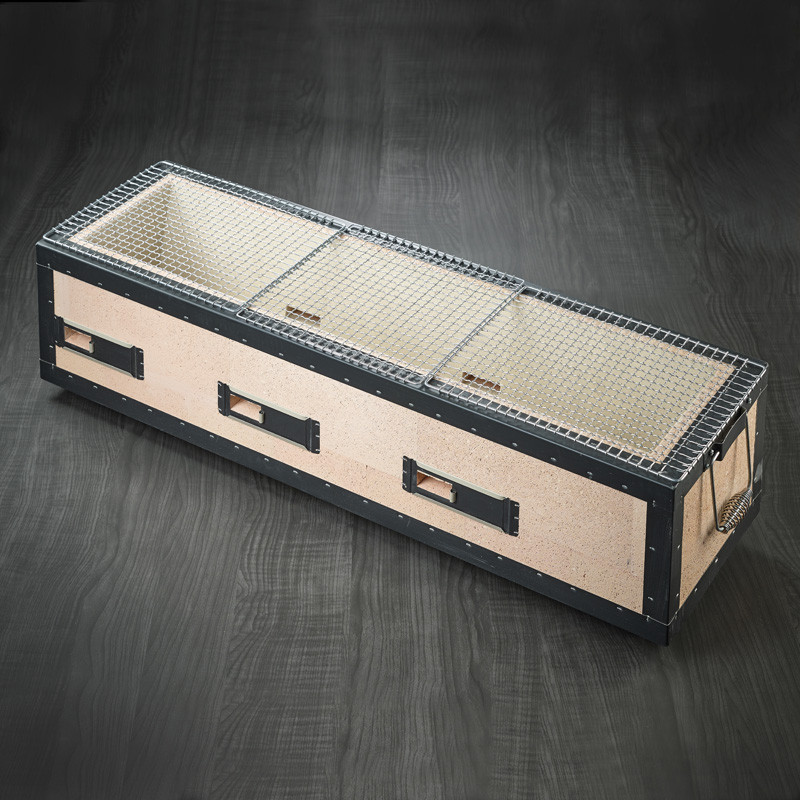 Konro barbecues are very popular in Japan. You can grill a long fish without cutting or moving it.

Due to estimated weight and volume of the package, we can not offer you to select your carrier online. Contact us by phone on +33 (0) 2 40 83 33 99 or by email at contact@nishikidori.com so that we can finalize your order together.

Constitution of the barbecue :
The barbecues in diatomaceous earth consist of insulating bricks which have been heated to 1000 ° C. This improves durability, thermal insulation and resistance to weather and frost and humidity. The strength of galvanized steel is enhanced, minimizing heat leakage. Since heat expansion and contraction are absorbed at the joint surface, the reinforcement of the metal fittings is effectively done.
Konro barbecues have one or more doors on their side. These openings protect from heat and prevent their diffusion all around. The diatomaceous earth accentuates the infrared during barbecue cooking and this has a positive effect on the tenderness of the meat.

These barbecues are perfect for yakitoris, large pieces of meat, whole fish ... Diatomaceous earth barbecues are the best known tools for cooking over a wood fire.

Origin
Ishikawa, Japan
Weight
15 kg
Dimensions
770 x 230 x 210 mm
Packaging
1 barbecue + 1 netting
Materials
diatomaceus earth
Recommandation
BARBECUES CAN BE PARTICULARY DANGEROUS AND MUST BE USED WITH CAUTION. THEY SHOULD BE LEFT WITHIN THE REACH OF CHILDREN OR PEOPLE WHO ARE NOT ABLE TO USE THEM OR APPRECIATE THEIR DANGER.