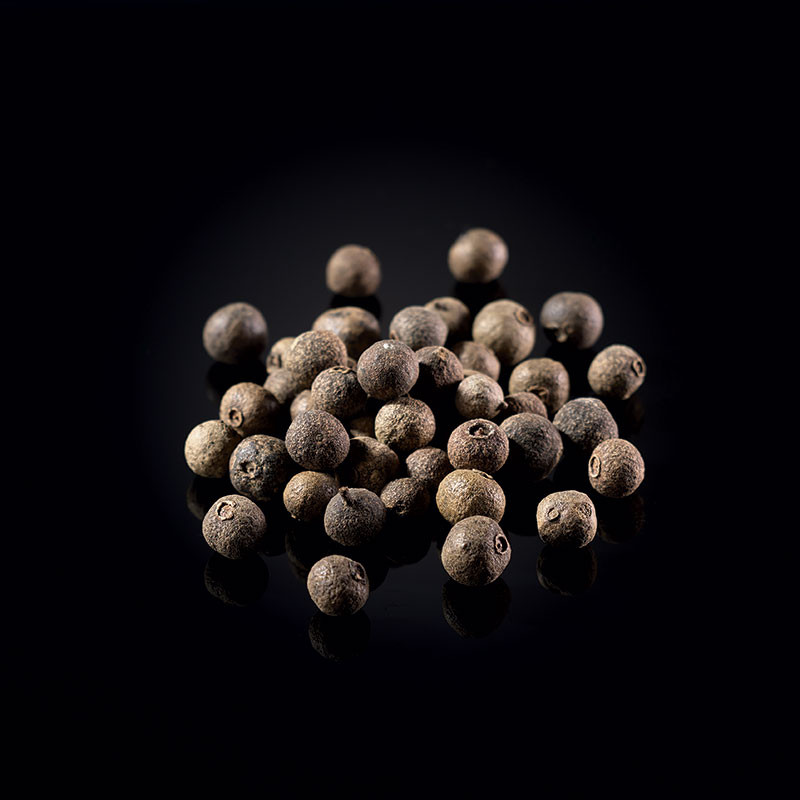 A warm nose, spiced with a dominant note reminiscent of clove oil, freshly grated nutmeg, and burnt juniper berries or Tasmania berries, a subtle touch of cinnamon with a hint of pepper, but also fresh citrus and menthol notes reminiscent of eucalyptus leaves.

This spice is commonly and improperly called Jamaica "pepper" or Jamaica "spice" even though it doesn't belong to either of these two families. It makes more sense to call it "allspice", as its scent evokes the four main spices. It can also be called myrtle pepper, pimenta or newspice.
This tree, native to tropical America, from the Caribbean, belongs to the Myrtaceae botanical family. It is mainly grown in Jamaica and in the tropical areas of America, Guatemala, Honduras and Mexico.
This large tree also called the myrtle pepper, can grow up to 10 metres high and can produce fruit for up to 100 years. It is adorned with pretty white flowers from June to August which turn into round berries about the size of pea which redden when ripe. Like pepper, the berries are picked before maturity and sun dried which turns them an elegant brown.
Several growing attempts outside the area of origin have been unsuccessful. The English tried this in India, and also without success in Sri Lanka, Malaysia and Australia.
The tree is found in the wild in the Caribbean, Central America and the northern part of South America. The spice, brought back to Europe for the first time by Christopher Columbus, was incorrectly named Jamaica pepper, certainly due to botanical ignorance, but also for profit reasons, by passing it off as an "expensive spice" and selling it for a fortune.
The Mayans used it to embalm their dead. Today it is often used in Caribbean cooking with fish and delicious puddings.

Jamaica "pepper" is used in baking to make some biscuits, in ketchup (which is a very old Chinese invention and actually very high quality when not the American industrial product saturated with sugar and artificial flavours that we unfortunately know all too well), as well as in Benedictine and Chartreuse liqueurs.
This wonderful spice is relatively unknown in our latitude, which is a shame as it is rich in flavor.


Our perfect combination : use in soups and stews, terrines and marinades. It will work with some fish - sardines, anchovies, mackerel and especially herrings. It is perfect with meats such as pigeon, guinea fowl and lamb. We highly recommend you use it with stews and hotpots. It blends harmoniously with fresh fruit salads - melons, pineapples, strawberries, figs etc...